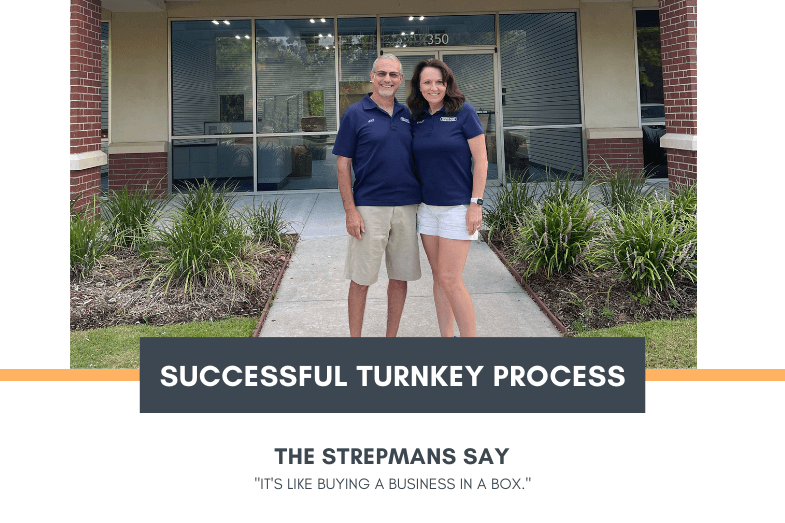 Jay and Shelly Strepman say Pinch A Penny isn’t exaggerating when they call their franchise a “turnkey operation.”

The owners of the brand’s newest location in East Woodlands, Texas, which opened August 18, says launching their Pinch A Penny was like “buying a business in a box.”

“Every person we’ve met at Pinch A Penny has been wonderful,” says Jay. “They think of everything, and they had an answer for every question that occurred to us.”

From finding the perfect location to learning the computer system to training, the process was perfectly smooth – and everything went exactly as they were told it would go, Jay says.

The Strepmans are typical Pinch A Penny franchisees, midcareer professionals who are transitioning from corporate America. Shelly worked more than a decade in corporate finance before becoming math teacher. Jay is retired from United Airlines, where he fixed airplanes for a living. The only thing either of them knew about swimming pools was what they learned building and caring for their own saltwater pool at their house. “I was definitely a DIY guy,” Jay says.

They had been talking about starting their own business, possibly a franchise, for years. At one point, they actually looked into buying a Taco Bell franchise but were turned off by the seven-figure price tag, the requirement to have five years’ experience in the food industry and the fact that there were an abundance of Taco Bells nearby.

As with so many things in life, it all came down to timing for the Strepmans. They say all the right things happened at exactly the right time.

“I was teaching, and then COVID happened,” Shelly says. “One day we got a sale flyer in the mail from Pinch A Penny, and on the back it said there were franchises available in our area.”

Jay adds, “A lightbulb went on, because we realized we just didn’t have anything like that in our neighborhood.”

They began talking with Pinch A Penny about the opportunity, which included looking at the number of pools and competitors in East Woodlands. “When we met with (Director of Franchise Development) Adam Heflin, he pulled out his iPad and showed us exactly how many pools were in our area,” Jay says. “It was so impressive! And we were looking at their proprietary map of all the pools, and we realized we could provide this service to the community.”

The couple attended Discovery Day, and they “just clicked” with everyone they met at Pinch A Penny.

“I kept asking Jay, when are we going to meet a jerk?” Shelly says, laughing. “Everybody we met was so nice and so easygoing. And they all really knew their stuff and made it so easy for us.”

For example, East Woodlands is a master-planned community, and so the Strepmans ran into some delays trying to get approvals to build the store. “Pinch A Penny not only worked with the landlord, but they also sent a package to the township to respond to their concerns and help us get approval,” Shelly says.

Michael Arrowsmith, Chief Development Officer, says that kind of support is what separates Pinch A Penny from other franchise systems. “They might say, ‘Go find a site and we’ll approve it,’ or, ‘Go find a general contractor, and we’ll approve them.’ We will find your actual store location and we will recommend a contractor who does good work and who may have built a Pinch A Penny before. It’s a process, and we work it with you – together.

“We know these franchisees have never done this before, but we have,” Arrowsmith says. “Since we really want them to be part of our franchise system, we design systems that help them succeed.”

Shelly says Pinch A Penny’s turnkey approach made a huge difference. “I think we would have been really lost with the real estate, but they negotiated the best possible deal that we could have ever gotten.”

Heflin gave the Strepmans a 15-step checklist to show them how the launch process worked. Their experience followed the plan to a T, Jay says.

In March, they attended training in Florida. “The first week is like drinking from a firehose,” Jay says, “but it definitely gets easier as you go on.”

They were thrilled to get books of reference material that covered everything from water testing to human resources and legal questions to take home with them. “And we have been referencing them,” Jay says.

He is grateful for the cell phone numbers of their instructors, who encourage franchisees to text any time they have a question. “They always answer right away,” he says. “They are just so helpful.”

When it came time to learn the new computer system, Pinch A Penny sent someone to Texas to re-demonstrate the POS computer – since training had occurred a few months earlier – and to teach the Strepmans how to use the field software. “Any follow-up questions I’ve had, I called the help desk, and they were so nice,” Jay adds.

In preparation for the grand opening, a Pinch A Penny team stocked the new store’s shelves, organized the back room and handled the advertising. On opening day, a team of trainers were on hand to help take care of customers.

Meanwhile, the Strepmans met Kevin and Debbie Glass, who opened their new Pinch A Penny in Conroe last April, and the couples became fast friends. “We kind of went through the process with them, and we used the same contractor who built their store, which made it so much easier,” Jay says.

“We started going to Conroe on Saturdays and working with them, which gave them a little more help and gave us some experience and confidence before we opened,” Jay says.  “It’s been really helpful for both of us.”

The Strepmans were also getting plenty of hands-on practice in their own franchise area, having signed 14 pool cleaning customers before their store even opened. They are excited about the future and grateful for the help and friendship of everyone they’ve met along their Pinch A Penny journey.

“We have dealt with so many people,” Shelly says, “and every one of them is as awesome as the last one.” 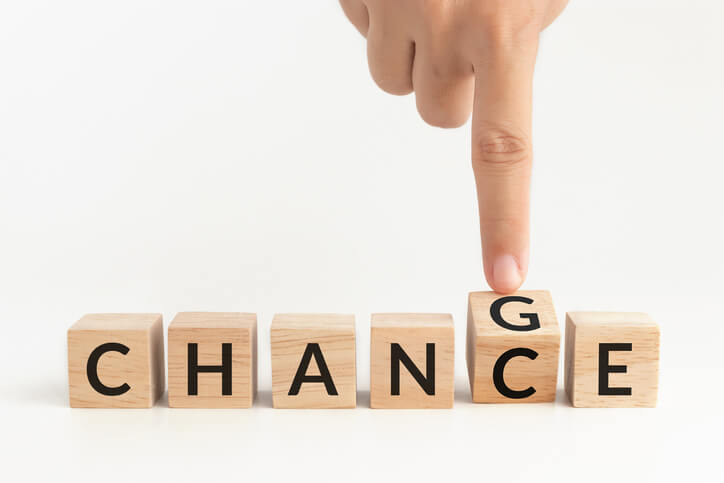 Perfect Time to Convert to a Pinch A Penny Franchise 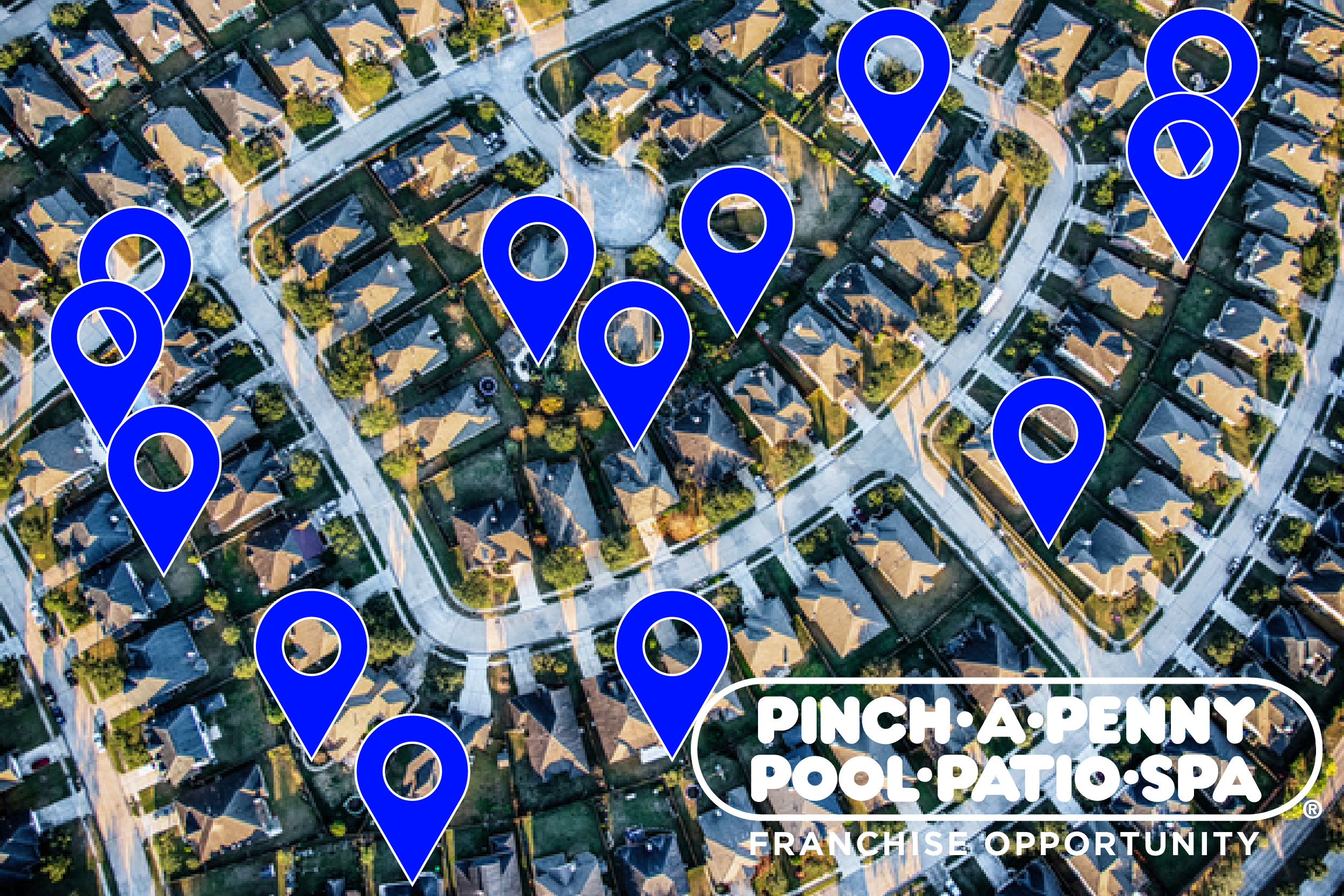 Why 2021 Is the Perfect Time to Launch a Pool Business